Well hi! It’s been a long time since I’ve published anything…forgive me for my extended absence. A lot has happened in these past few months, which I think warrants an excuse for not getting a blog entry out. 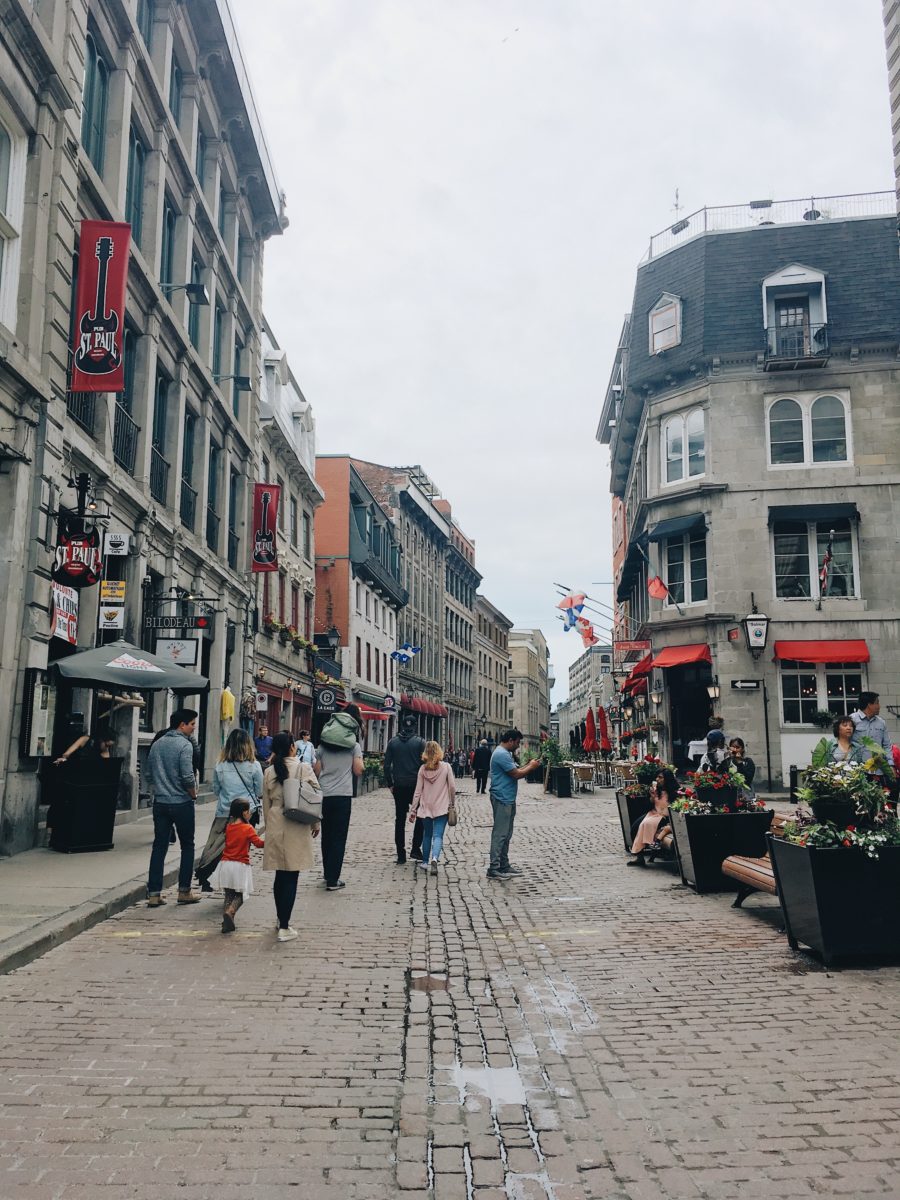 Being broke and married is certainly a fun time (please sense my sarcasm). For us, this meant having to wait to do any kind of travel for quite a while. Last summer, Oliver made the suggestion that we take a trip to Montreal the following Memorial Day. Me, being the travel bug that I am, instantly said yes to the idea. So after almost a year of saving some moolah, we booked a pretty sweet Airbnb for the weekend and finally took our first trip alone as a couple since our honeymoon. 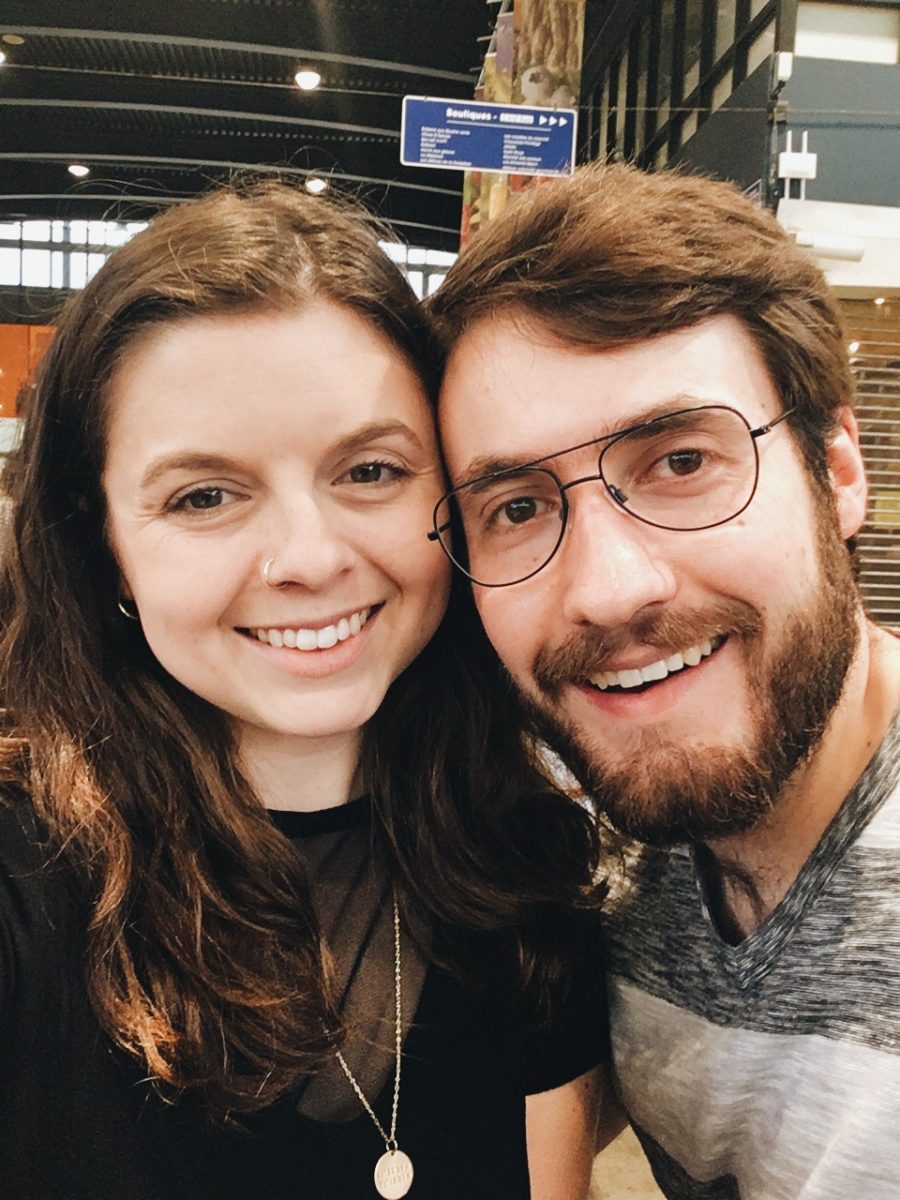 This isn’t obviously the first time we have traveled since we got married. We have been blessed with incredible parents who front the bill for some trips to hang out with them. For Oliver’s parents, we spend time with them over at Ten Mile Lake in Minnesota for an entire week. For my parents, it’s a week in Venice Beach, Florida where we rang in the new year drinking bubbly in the hot tub. Yes, we’ve been blessed to still travel. But traveling with family and traveling just as a couple are very different experiences, and it was time for us to do a little something on our own.

I took off the Friday before Memorial Day weekend, giving us a full four days to travel and be together. Naturally, I documented and journaled the entire trip. Here’s a rundown of some of our favorite places that we recommend, just in case you ever decide to take a trip yourself! 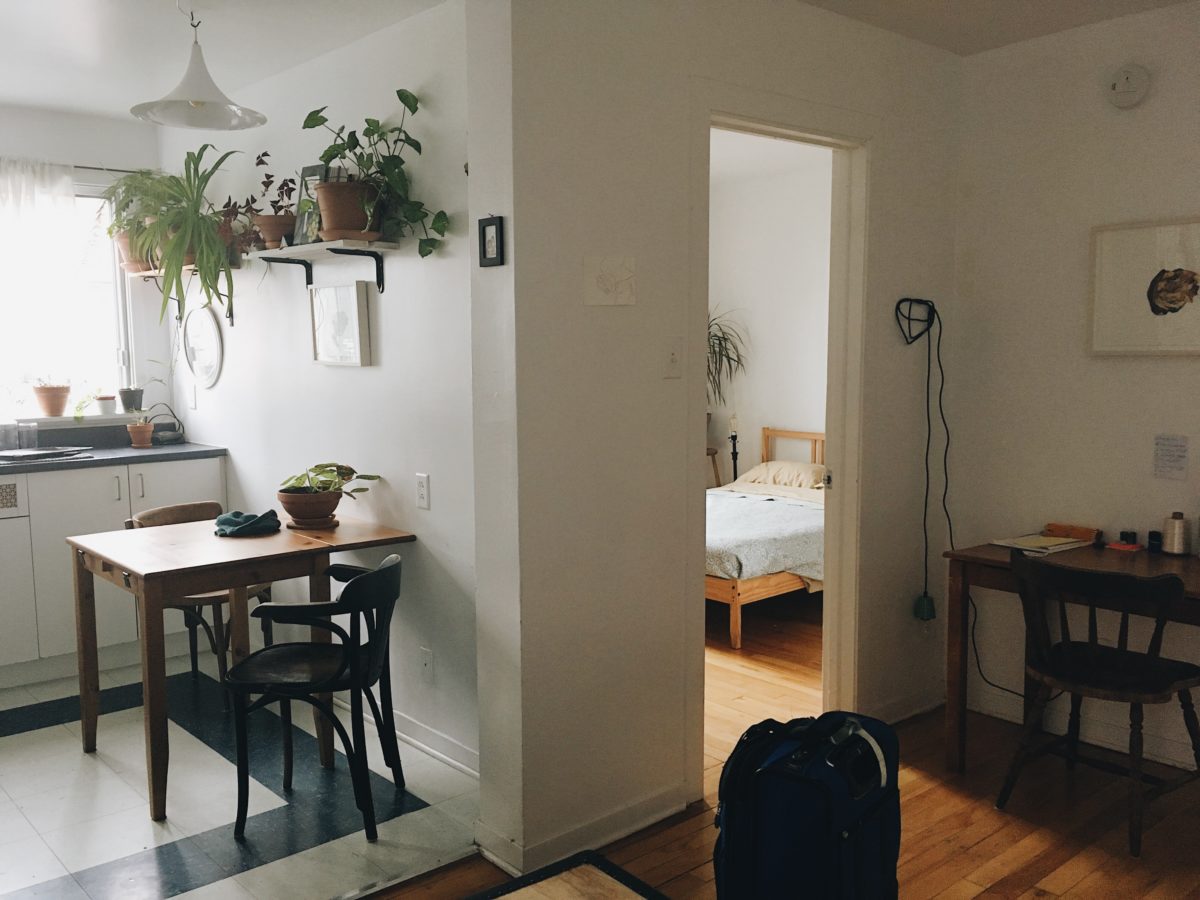 So the first seven hours of the day were actually spent driving to Montreal. Oliver and I somehow did the drive both ways with only one stop, so we were pretty proud of ourselves. Even border control was a smooth process. We ended up getting to Montreal around 3 p.m.

We stayed in this delightful Airbnb in Mile End, which is known as the fashion district of the city. Lots of cute boutiques, coffee shops, and bars around the area. 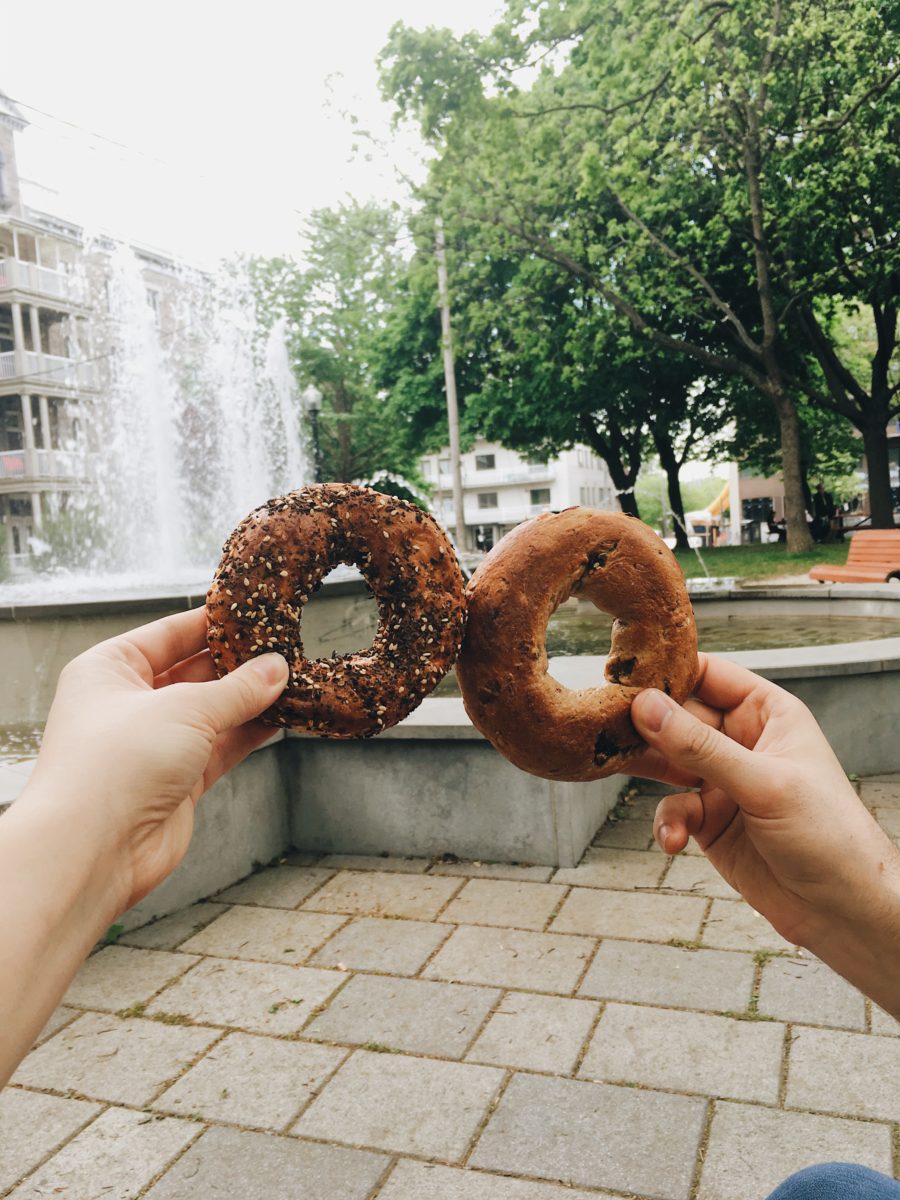 Fairmount Bagels: Although NYC is known for being a top bagel city, Montreal is also known for having some of the best bagels in the world. Our Airbnb was close to two of the famous bagel shops in the city, which yes, Oliver did plan that on purpose. Given my obsession with bagels, it was our first stop. You can quote me when I say that Montreal bagels defiantly rival NYC bagels. And no, I’m not kidding.

Parc Lahaie: Since there wasn’t a proper place to sit in the bagel shop, we took our bagels over to a park close by for a late afternoon picnic. There’s a beautiful waterfall that we sat near, munching on bagels and finally relaxing after a long journey. 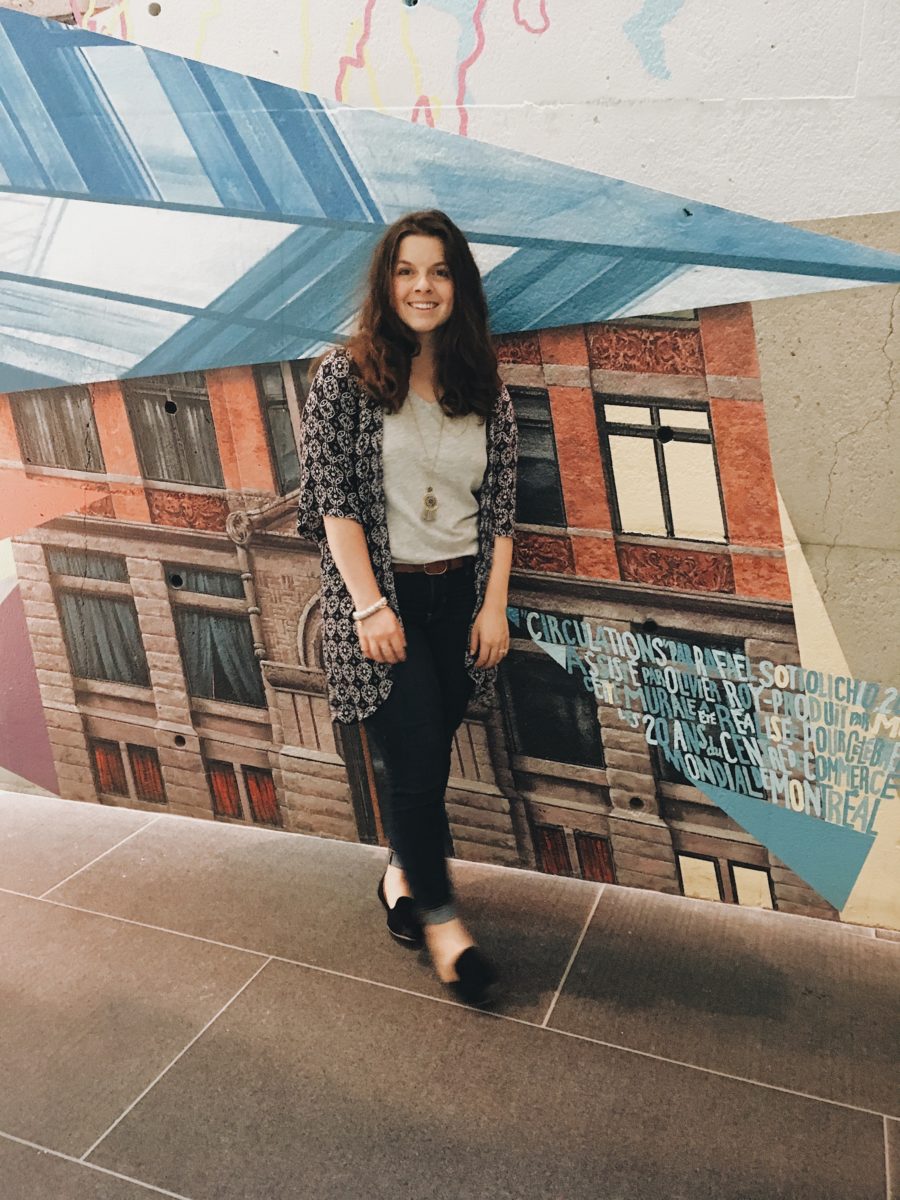 Gelato at Marche de Jean-Talon: Once we brushed off the crumbs we took a trip over to the market at Jean-Talon. It was heavenly. The number of delicious fruits and vegetables, along with other local goods, was out of this world. I fully admit to feeling jealous of this market. Each stand had little plates where you could taste the different goods, which even included honey, syrup, and bread. Around the market are a few smaller shops, so we grabbed some gelato and did some people watching for a while.

Beers at Helm Microbrasserie: After a little nap we grabbed a drink at this microbrewery. They had a slew of beers and ciders, but we settled on two large pints of beer. We didn’t end up eating at this place, but the burgers coming out of that kitchen looked mouthwateringly good.

Poutineville: Canada certainly knows how to do poutine, and Poutineville was the place to go. It was set up like a burger counter where you could order your plate of poutine with all different types of fries, cheese, and sauces. We ended up getting three different types of poutines. One with regular fries, poutine gravy, cheese curds, onions, and smoked meat. Another with sweet potato fries with cheese curds and pepper sauce. And one with hand crushed potatoes with cheese curds and red wine sauce. 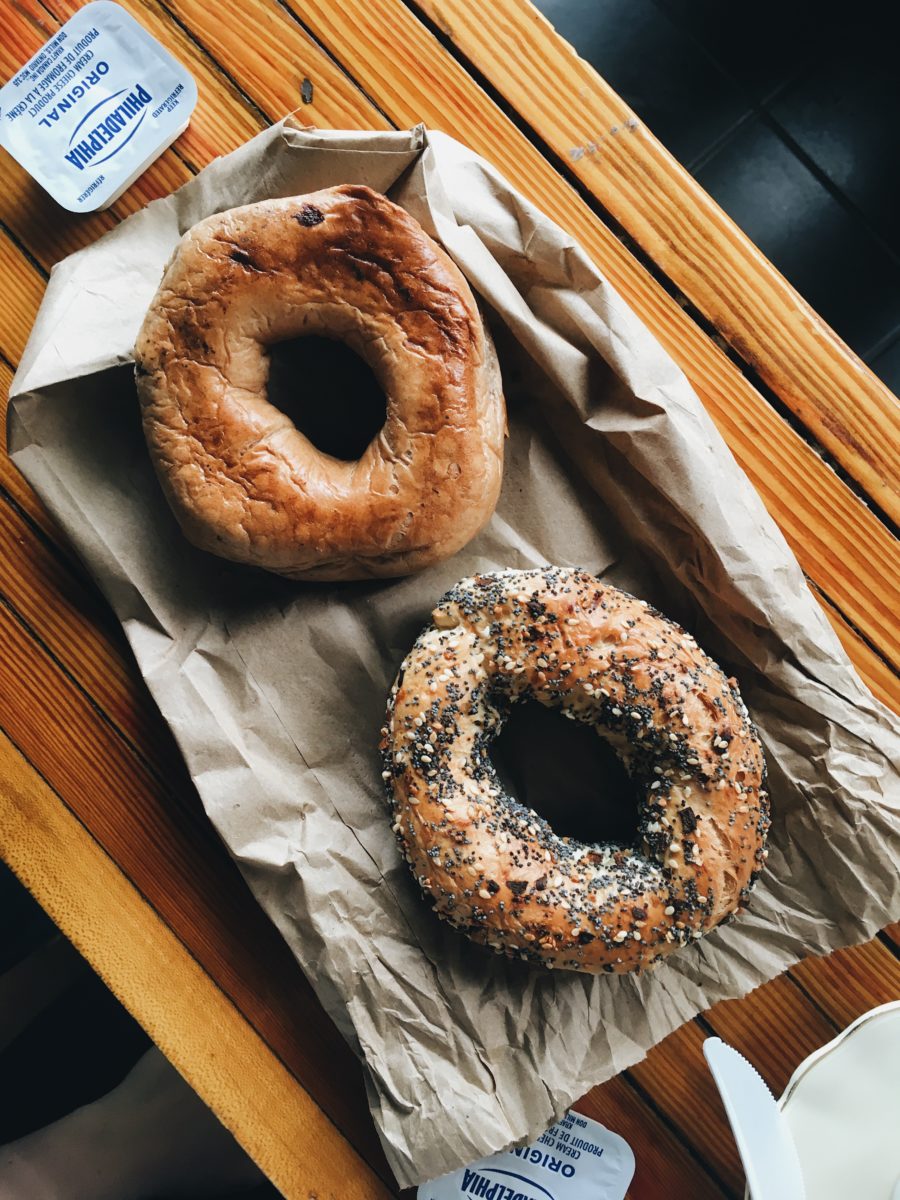 St-Viateur Bagel Shop: Our first stop in the morning was, you guessed it, bagels. We went to the other famous bagel shop near our Airbnb and then slipped into a coffee shop. After a very careful analysis, I have to admit that this bagel shop did win my heart. I ended up eating three more from this place over the course of the weekend. 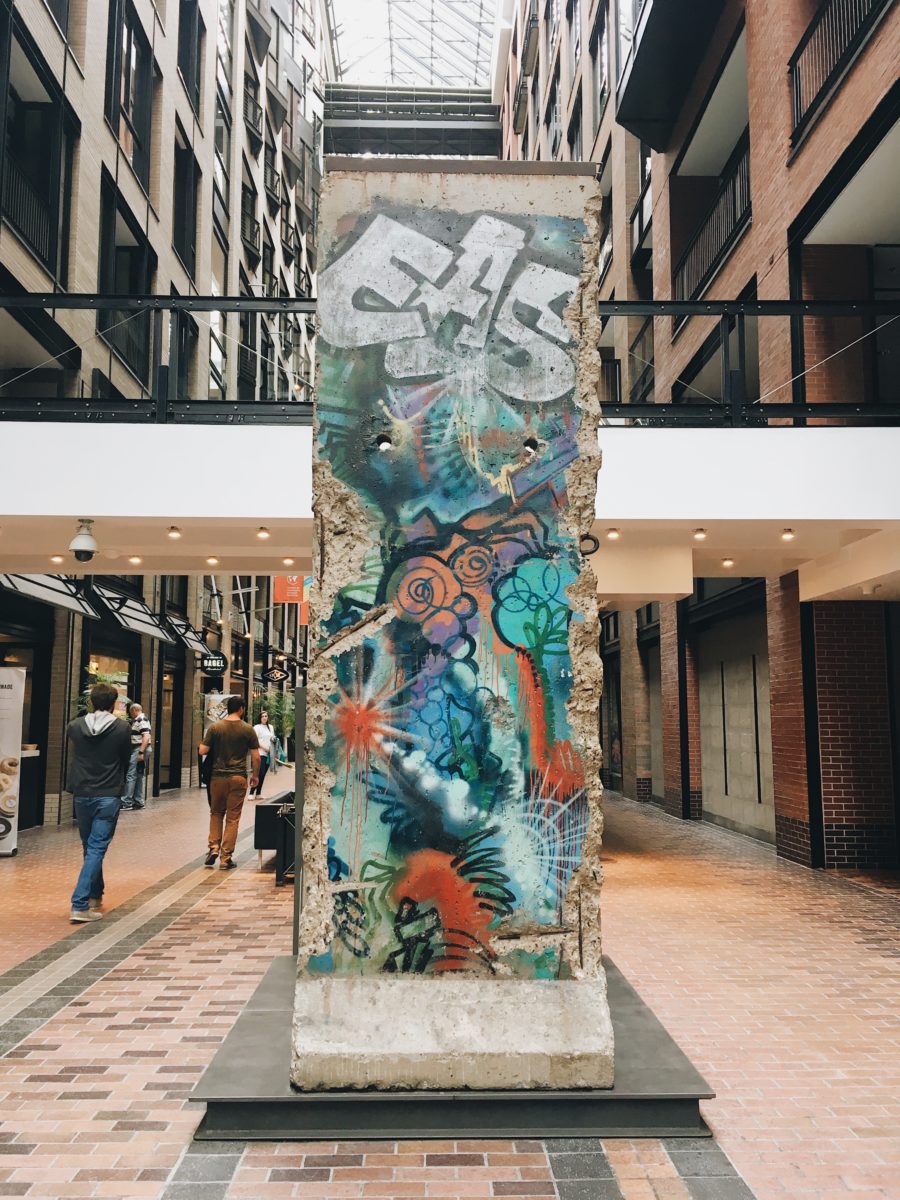 See the Berlin Wall at the Underground City: After the bagels we took a bus to downtown Montreal, which has a 20-mile underground mall. We didn’t explore the whole thing, but we did find part of the Berlin Wall. It was a good activity for a rainy day. 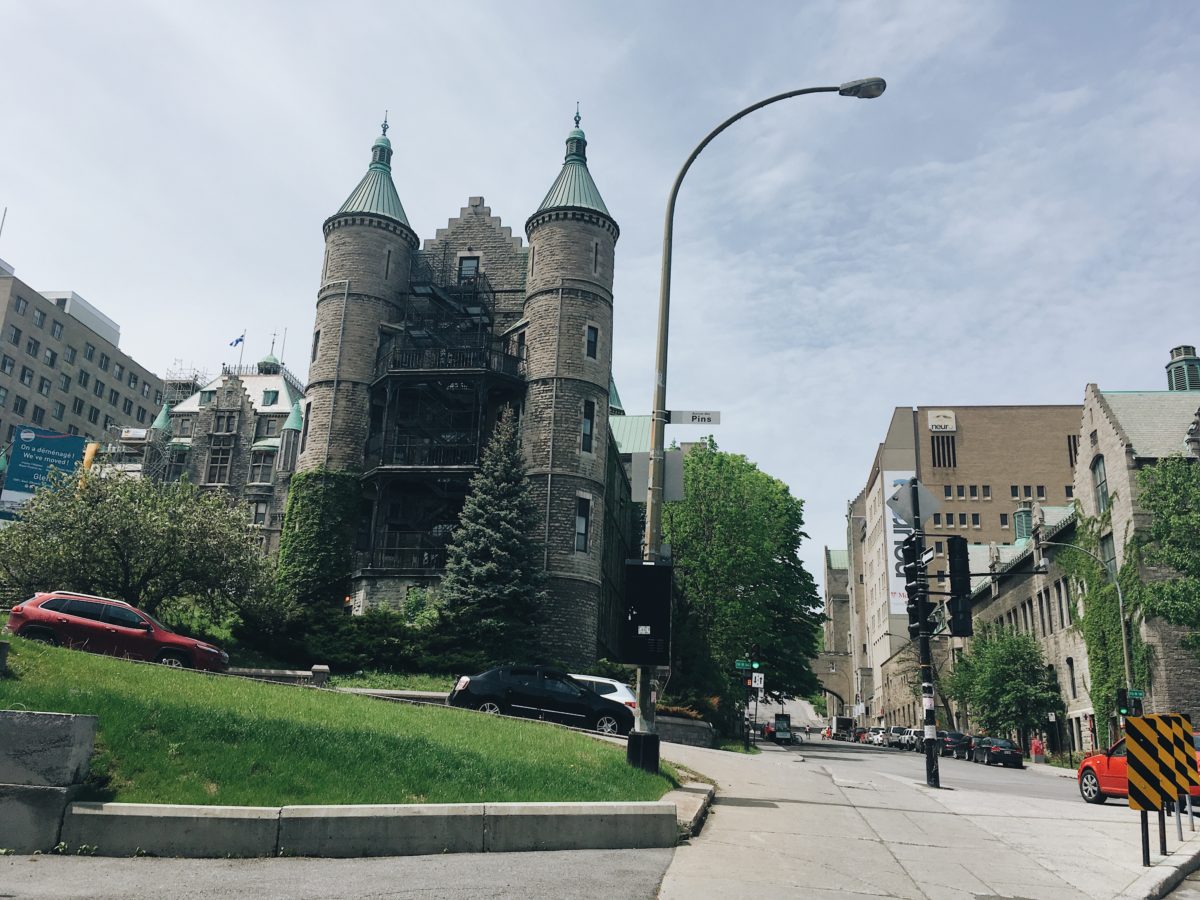 Walk around McGill University: McGill’s campus is absolutely stunning. As we walked around campus, the clouds started to break and the sun bounced off the gorgeous buildings. I’m pretty sure if Hogwarts had a college campus it would look very similar to McGill’s.

Coffee break at Humble Lion: On McGill’s campus we stopped at a coffee shop for a quick break. We were moving quite a bit on this trip, and found ourselves needing a few pick me ups throughout the day. 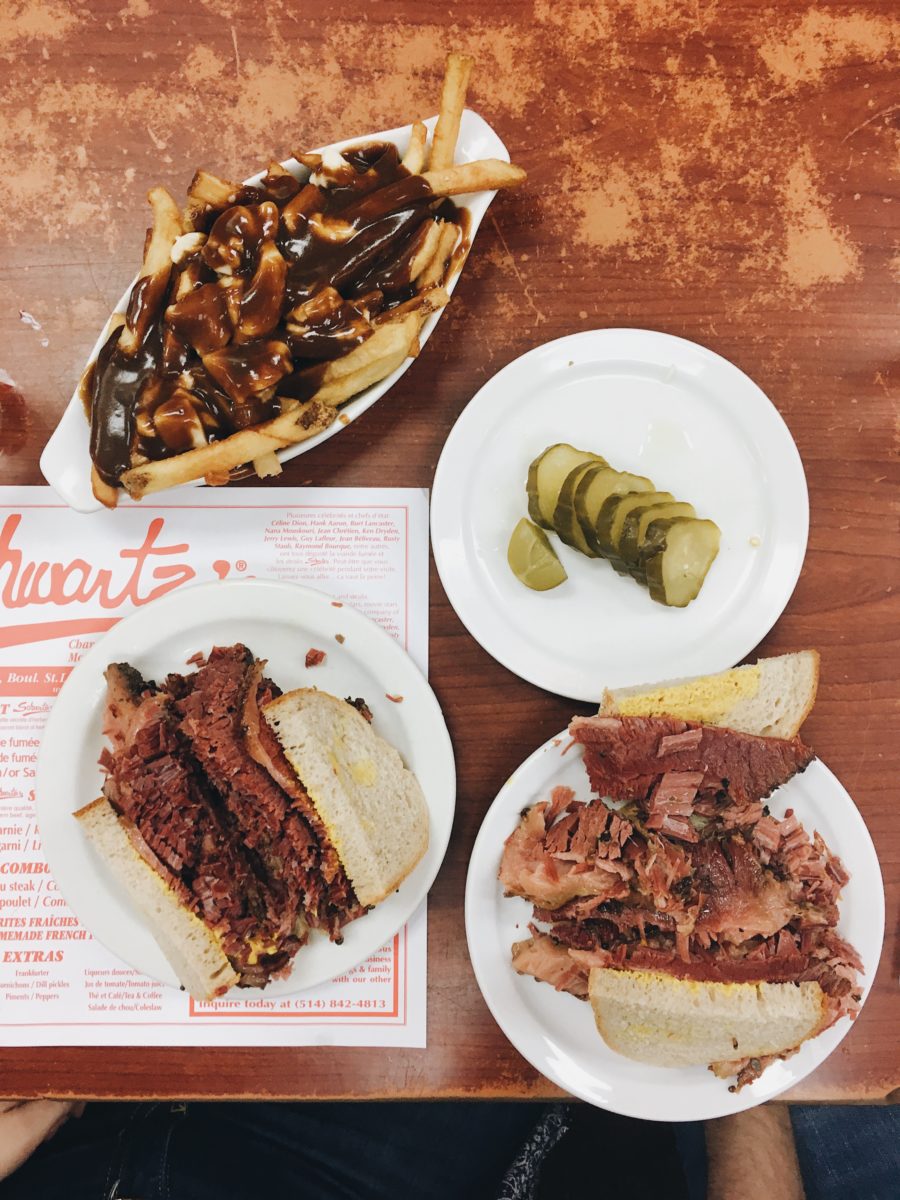 Smoked Meat sandwiches at Schwartz’s: In order to explore the city even further, we decided to continue walking back to our Airbnb in Mile End. On the way we stopped at Schwartz’s, who are famously known for serving delicious smoked meat sandwiches. Warning: The lines are very long. But I promise the sandwiches are worth it. If you ever go, the trick is to eat in pairs. They have counter seating that goes through customers pretty quickly. So although Oliver and I were close to the back of the line, we were the only couple compared to parties of four or five. So when they were looking to fill counter seats, we skipped the line!

Shopping in Mile End: Before crashing in our Airbnb for a nap, we did a stroll through Mile End to see some of the shops. It really is a fun area, so if you’re in Montreal looking for a unique shopping spree, this is defiantly the area you want to be in. 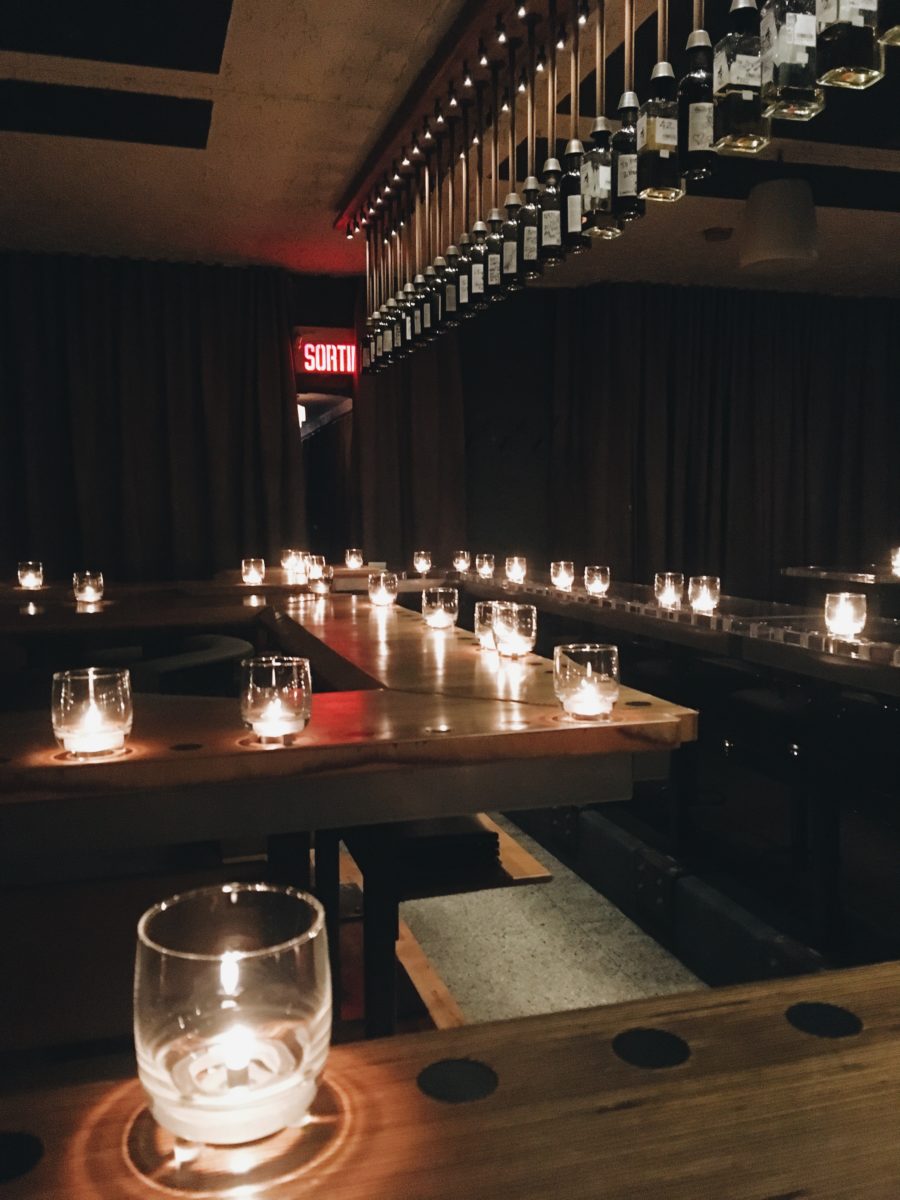 Drinks at Big in Japan: Oliver and I are huge fans of hidden bars, so he did some digging and found this pretty cool one near the restaurant we planned to go to for dinner. It is a very soothing atmosphere and a wonderful escape from the hustle and bustle of the city.

Dinner at Artigrani Pizzeria Cucina: For some reason, I was craving pasta that night, so we found an Italian place for dinner. They have great homemade pasta that satisfied my craving. It was also a nice break from all the poutine we had been eating! 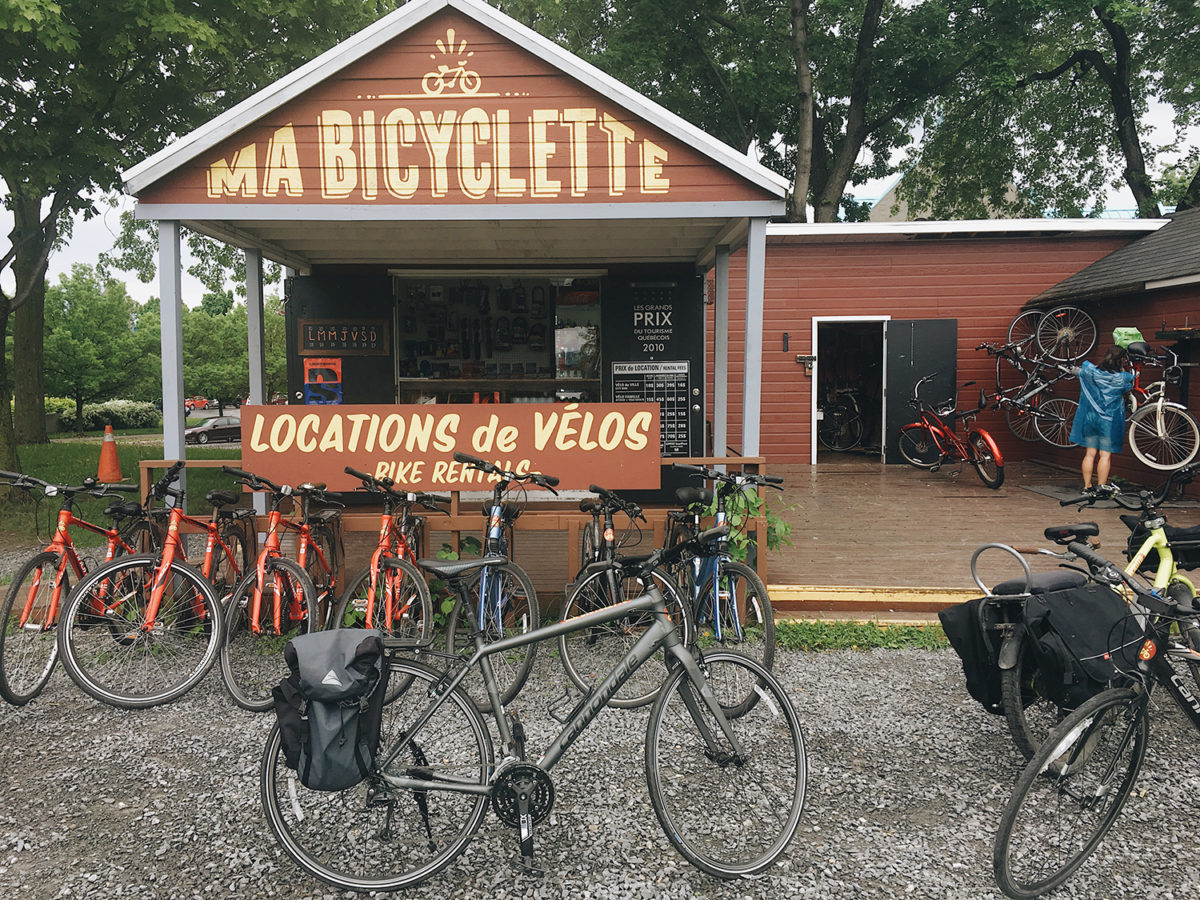 Rented bikes from Ma Bicyclette downtown: After getting bagels again from St-Viateur, our plan was to explore Old Montreal. Oliver, being his clever self, thought it would be even better if we biked around the city while exploring. Montreal is a great city for bikers. After a day of biking (15 miles total), we instantly decided we need to be a biking family. I’m really hoping it will happen in the near future. 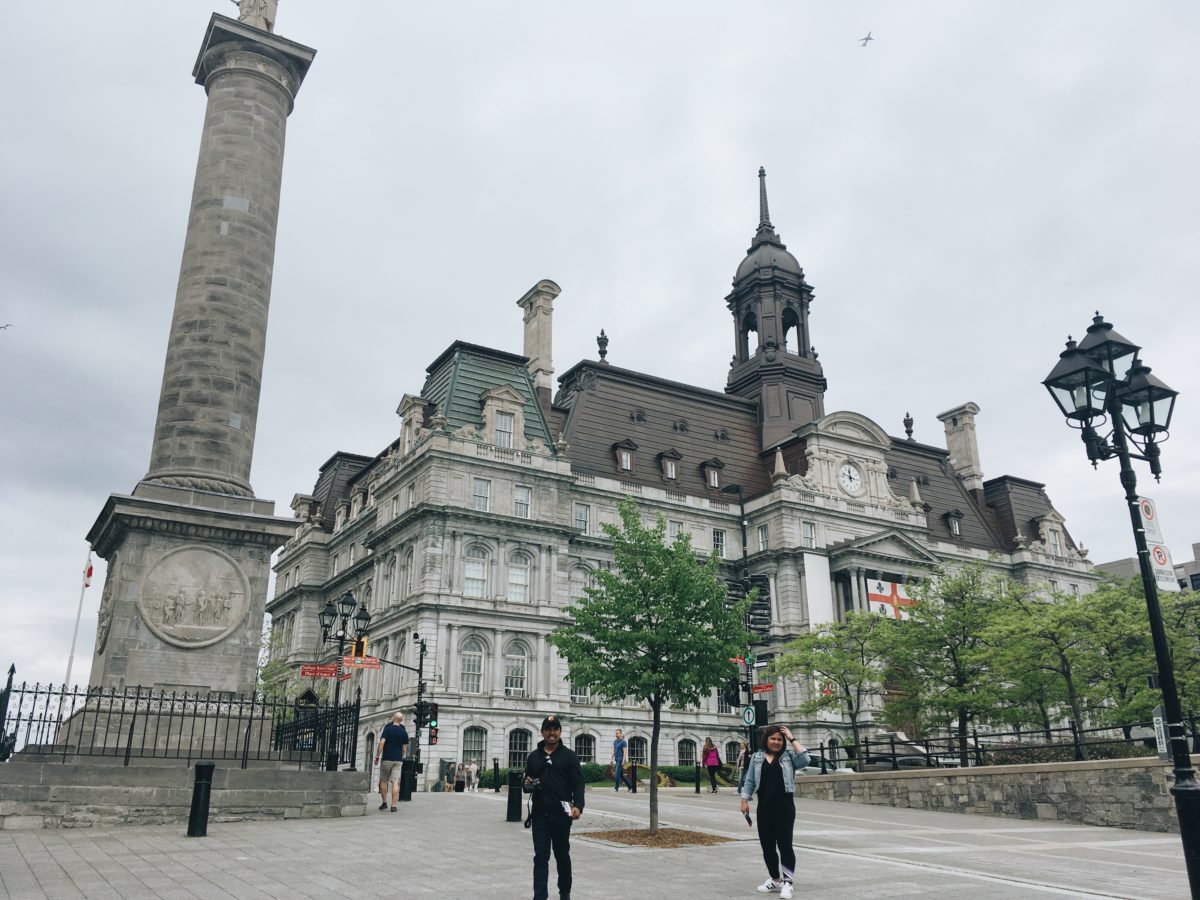 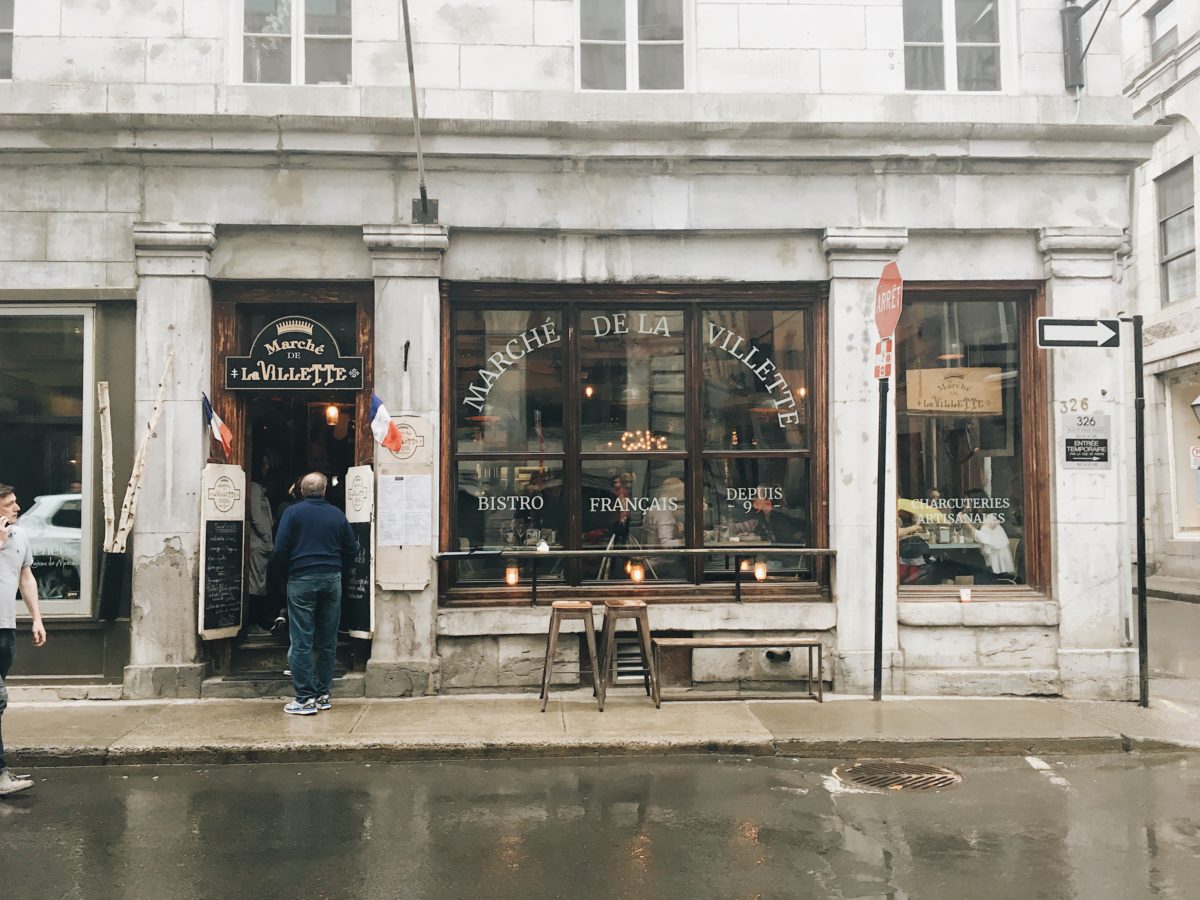 Lunch at Marche de la Villette: A rainstorm was supposed to roll through that afternoon, so when it started to drizzle we popped into this little French cafe for lunch. Originally I wanted to go into Olive & Gourmando for a sandwich, but the line was very long. This cafe was right across the street, and we were very satisfied with our decision. Between the cobblestone streets and the little lunch cafe during a rainstorm, it really did feel like we were in Paris. 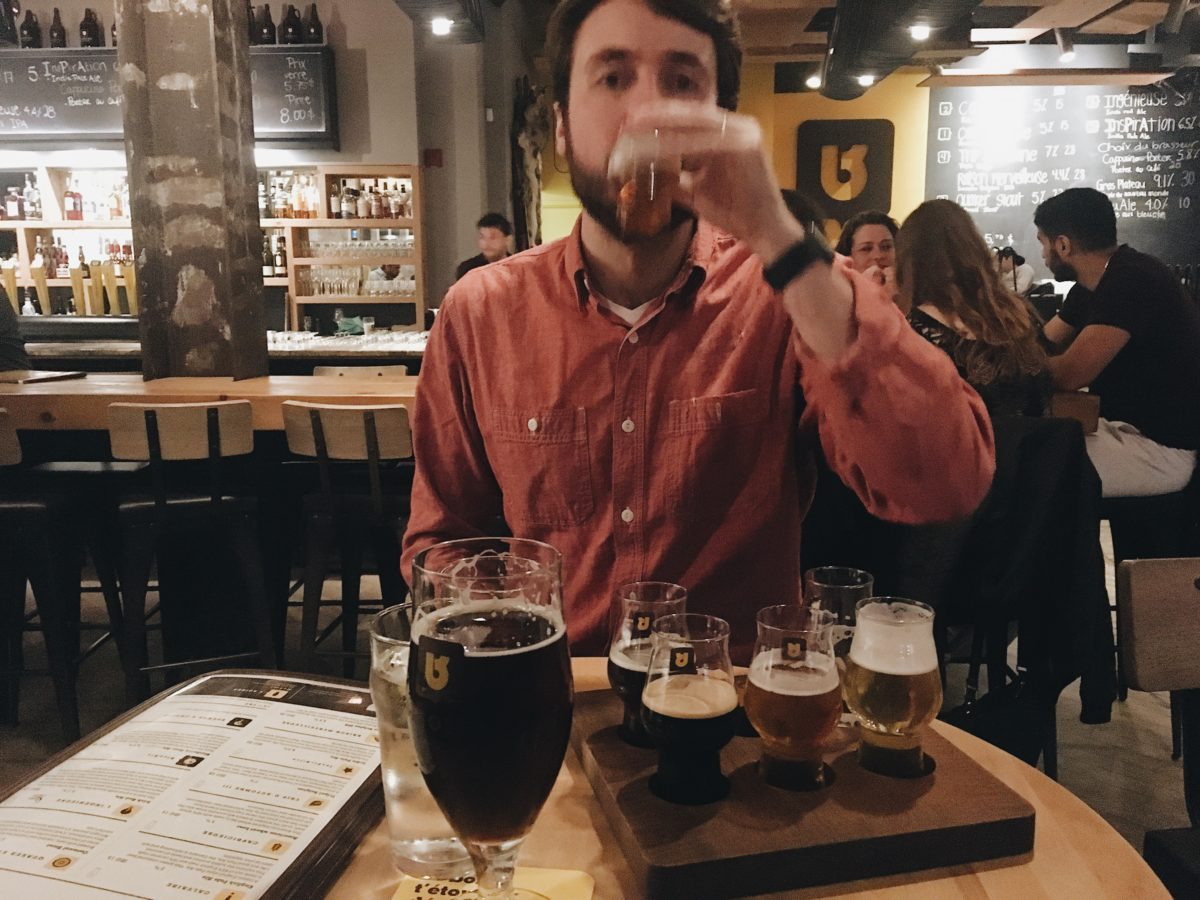 Drinks at Siboire Brewpub: After our ritual afternoon nap, we changed out of our dirty bike clothes and went to this brewery for pre-dinner drinks. If you’re looking for a quality flight of beer in Montreal, this is the place to go.

Late night food at Chez Léo Snackbar: Oliver and I ended up staying at the brewpub longer than we anticipated, so by the time we got to our planned restaurant, it was closed. We decided to go on a whim and eat at this snack bar instead. Now, this snack bar isn’t your typical late night food. Sure it had sandwiches and milkshakes, but the menu items were pretty gourmet. It was a bit pricey, but I would go back again and again for that duck confit burger.

It really was a great trip, and we were satisfied with our decision to go to Montreal for a long weekend. I suggested making a Memorial Day trip a tradition for the two of us. If we decide to make a tradition, where should we go next? Let me know in the comments below! 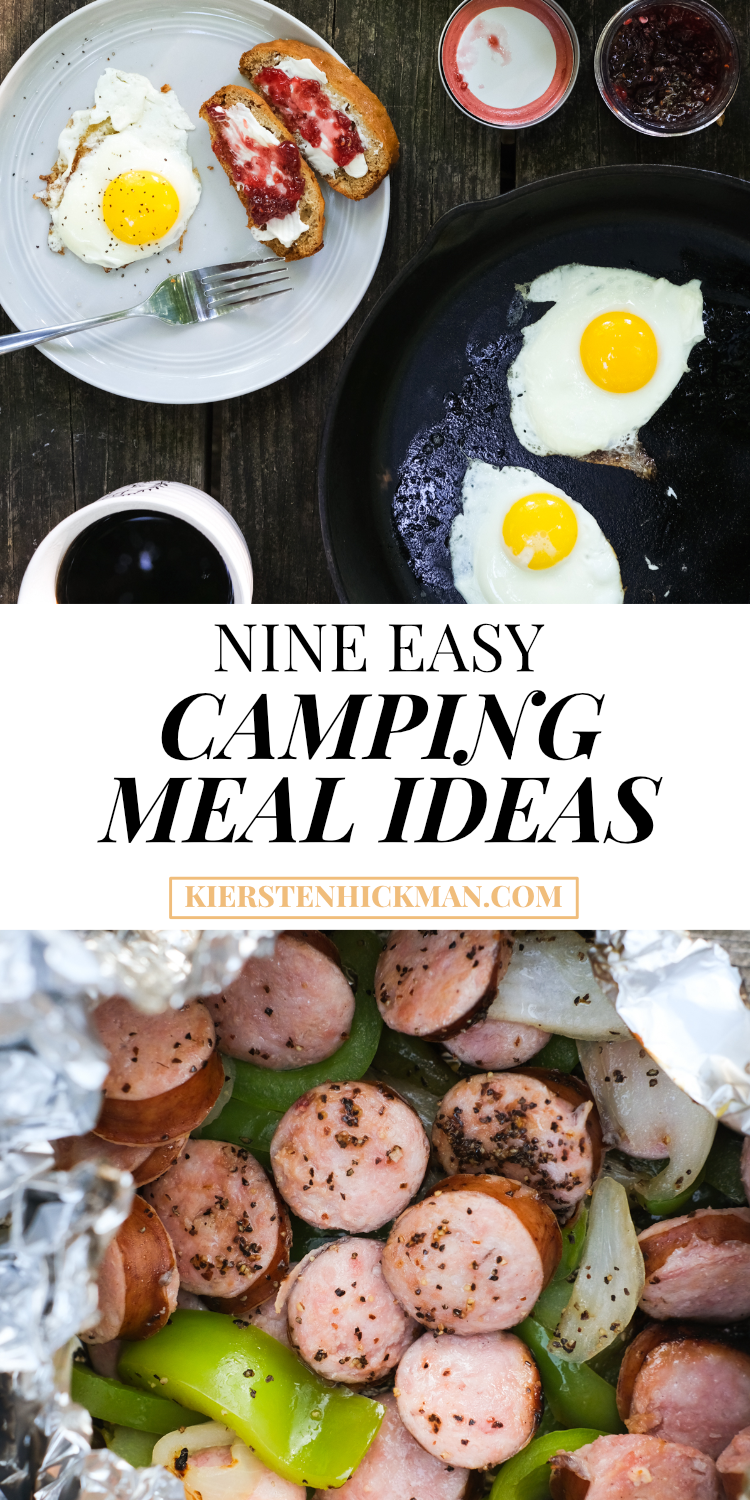 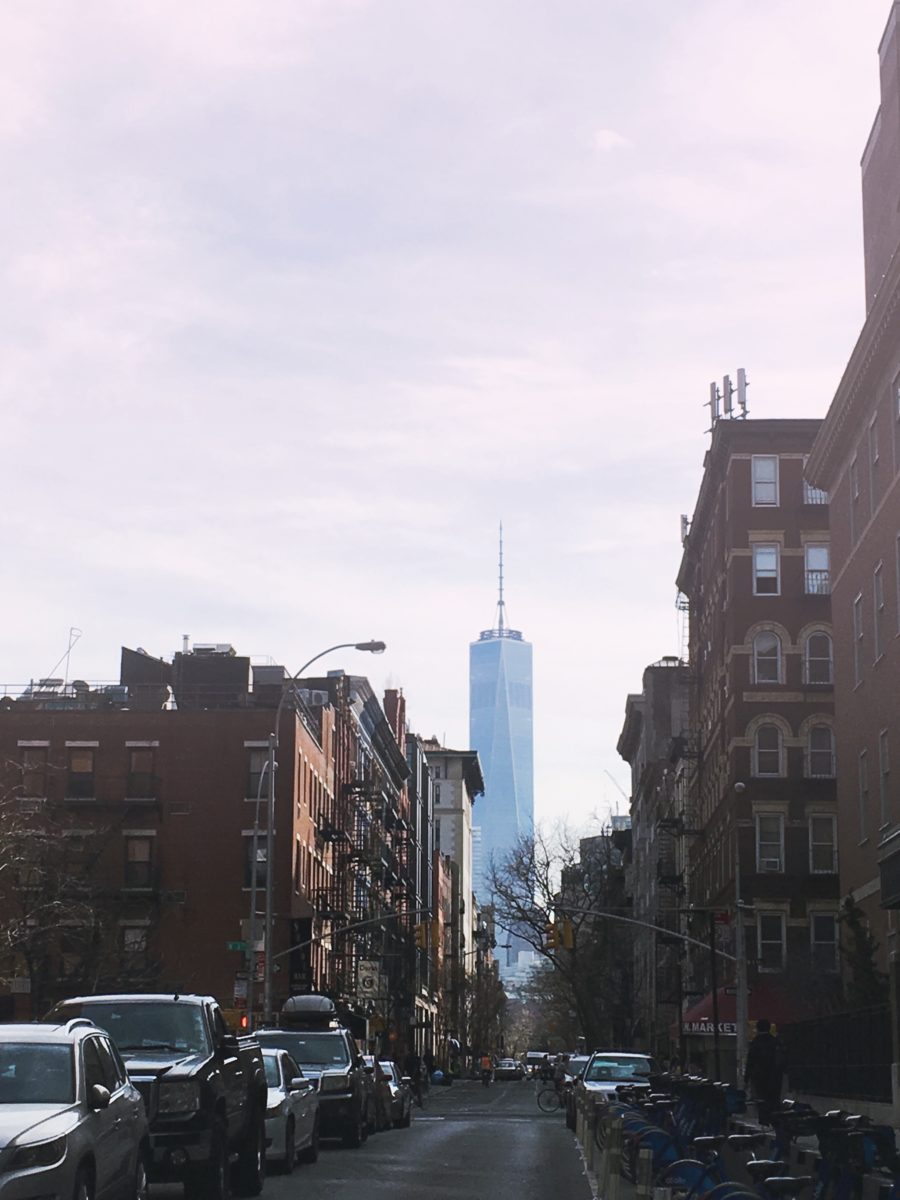 How to Make the Most Out of Your Travel Time 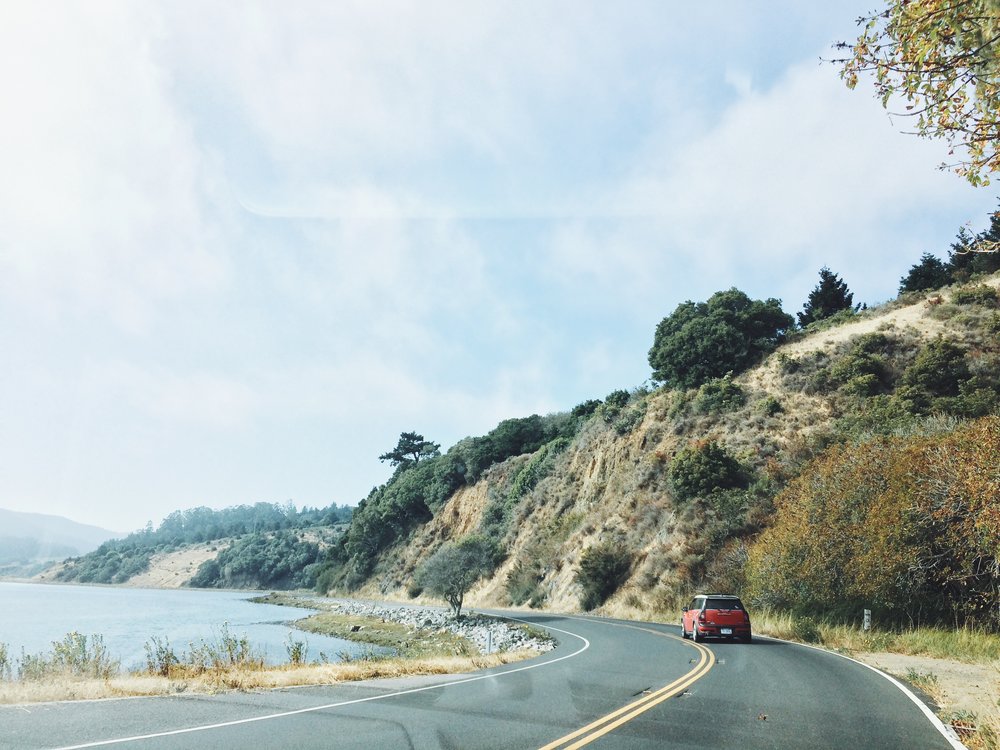 How to Save Money While Traveling